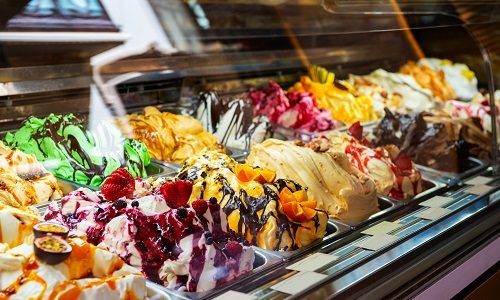 Ciao Amici.  A stop to the gelato shop is a must for visitors to Italy. Dazzled by the beautiful displays of Italy’s favorite frozen dessert, many people don’t know the differences between the ice cream Americans are used to eating and this creamier Italian version.

Originally created in the 1680’s by Italian chef Francesco Procopio dei Coltelli in his shop in Paris, Gelato was first only allowed to be sold to royalty. It was so popular with King Louis XIV that Procopio not only received an exclusive royal license to sell gelato in France, he received French citizenship. Eventually, he opened a shop serving gelato to the public in small porcelain cups, the size of egg cups. Adding coffee to the menu, his new café, Café Procope, became the first literary coffeehouse in Paris.

Procopio’s frozen creation also became a hit in his native Italy. And it is no wonder, because gelato is smoother, creamier and silkier than ice cream. As opposed to ice cream, which has a minimum of 10 percent fat, gelato uses more milk than cream, and contains only 5 to 7 percent fat. It also is rarely made with eggs, which is common in ice cream. Gelato is churned at a much slower speed than ice cream so it has half as much air whipped into it, which gives it a much creamier feel. Gelato is also stored 15 degrees warmer than ice cream, which is usually kept at 0 degrees Fahrenheit. This temperature difference, and the fact gelato has less fat, means the flavors of gelato are more prominent. Gelato usually comes in fewer flavors though, with fruit flavors, vanilla, chocolate, pistachio, tiramisu, hazelnut, and a fior-di-latte flavor with shavings of chocolate, called “Stracciatella” the most common. You’ll also notice gelato is served with a “spade” instead of a scoop, because of its softer texture.

Here is an insider tip though, to add to your gelato file: when in Rome or anywhere else in Italy, avoid the gelato that is all piled up like a mountain in the Alps, like you see in the picture above. The real thing, as in the best gelato, does not need to be puffed up with air. It should look more like ice cream in the case – with a surface that is not necessarily completely flat, but somewhat smooth. The height is a marketing gimmick.  So, go for the good stuff, and not the puffed-up piles often seen in tourist areas. The next time you are in Italy, though, make sure you make at least one stop for gelato!

The Differences Between Gelato and Ice Cream – The Spruce Eats