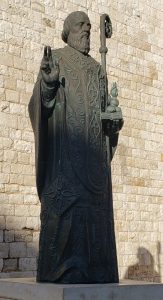 I’m a big fan of St. Nick.  And no, I’m not talking about the red, chubby Santa Claus; the over commercialized version we see everywhere at this time of year. I’m referring to the real St. Nicholas; the one who stood up for the divinity of Christ at the Council of Nicaea. The same saint who had a real heart for the poor and was known for his many charitable efforts, including the tossing of coins, for example, in the windows of homes of the needy. December 6th is his feast day in the Catholic Church, and we remember his love for his fellowman built on his love of Jesus.

Recently during our WINE (Women in the New Evangelization) and Shrine Italy Pilgrimage, my co-host Kelly Wahlquist and I, had the amazing opportunity of venerating the relics of this great saint in the beautiful southern Italy coastal town of Bari. Bari is in the region of Puglia, or the heel of Italy, and this area of the country, though often ignored by many American pilgrims, is filled with many amazing cathedrals, basilicas, and shrines dedicated to saints including St. Nicholas. 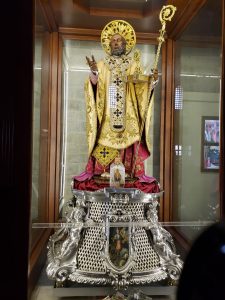 St. Nicholas was the Bishop of Myra, in southern Turkey. It’s hardly right around the corner from southern Italy. So how did Nicholas end up at the Basilica di San Nicola in beautiful Bari? In the first part of the 11th century, Myra fell into the hands of rulers of a Turkish dynasty, hardly friendly to the Christian faith. Merchants from Bari and Venice learned about the relics of St. Nicholas and became concerned the great saint’s tomb and the pilgrimage site attached to it might be desecrated. The merchants from Bari beat the Venetians in their efforts to get to the tomb, broke it open and sailed away to southern Italy with Nicholas in hand. He’s been there ever since. The basilica that you see in these lovely pictures from our recent pilgrimage was completed in the 12th century. St. Nicholas pray for us. 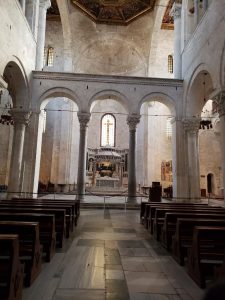