Whenever I think of the opera, memories of my father come to mind. You may have heard me share the very special recording of my father, a vocalist, singing the traditional Italian Christmas carols. My Dad was a mechanical engineer, but his real love was music, especially the opera. On Saturday afternoons, our house would be filled with the sounds of the many famous arias being sung by the talented artists at New York’s Metropolitan Opera, many of which were composed by Italian musicians. At the time, I didn’t appreciate them, hoping instead that Dad would turn on the local pop music station. But as I grew older and began to learn more about the stories attached to the operas, and the obvious talent it took to write as well as perform them, my attitude changed greatly and I have much regard and respect for opera, and especially Italian opera. 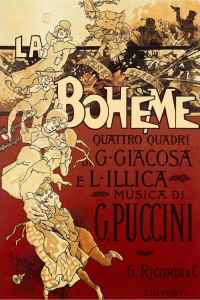 La Bohème was one of the Italian operas that come to mind, written by famous Italian musician, Giacomo Puccini. Puccini wrote this opera while living in the small village of Torre del Lago in Tuscany. It is a love story between a poor bohemian seamstress and a poet in Paris in the 1830’s, and its first performance dates back to 1896 at the Teatro Regio in Turin, Italy. The conductor was a young Arturo Toscanini. This year marks the 40th anniversary of Franco Zeffirelli’s beloved staging being performed at the The Met in New York City, and it is one of the the most famous and beloved operas of all time.

Watching and listening to opera is a great way to take a break from the hustle and bustle of life, and appreciate culture and the country, Italy of course, that gave us many of the greats behind these magical performances. So, in honor of the celebration of many of the great Italian opera composers and this historic anniversary year of Puccini’s masterpiece, why not treat yourself by watching or going to see a performance of an Italian opera, or even take some time to listen to just a few of the Italian greats, Pavarotti perhaps, singing one of the beautiful numbers, now world famous. Music is also great for the body and soul as well. And there is even evidence that listening to music can improve mood, relieve stress and anxiety and increase memory. Puccini or Pavarotti, Vivaldi and Verdi – take your pick. Many of these will leave you with feeling nothing less than Brava, Brava!