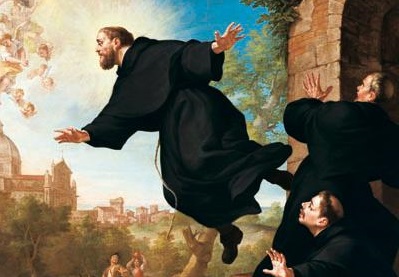 St. Joseph of Cupertino was born in Cupertino, in the Kingdom of Naples in 1603. His carpenter father died before he was born and his poverty-stricken mother gave birth to him in a barn. Learning disabled, Joseph received very little education, but was very devout with prayer. Beginning at age 8, he began receiving visions and ecstasies. They would begin at the sound of church bells or music, or the mention of saints, the Passion of Christ, the beauty of creation, or the Blessed Virgin Mary.

Challenging to most people he knew, Joseph’s ecstasies caused him to stop speaking mid-sentence, or drop whatever he was carrying, or doing, and stand motionless, his mouth agape. Misunderstood and rejected, his mother and others treated him very poorly. Joseph joined the Capuchins, but they rejected him after several months because he was too dull-witted and a distraction. He was then put out on the street with the few clothes he had brought with him. Rejected again when he sought out help by his mother, she pleaded for assistance from an uncle in the Conventual Franciscan order, who eventually allowed Joseph to enter as a servant to take care of the donkey.

Through a series of providential happenings, Joseph became a priest, even without an education. Joseph became well known for miracles of healing, multiplication of food, bilocation, and of his friendship with animals and birds, like St. Francis of Assisi. Continuing to have ecstasies while in prayer to God, he frequently levitated, and even flew up into trees or hovered in the sky. He was eventually moved to other locations, as villagers frequently sought to talk to him whom they knew was a saint. Finally, kept in serious seclusion by his order for years, Joseph died in Osimo, Italy in 1663. His preserved body is encased in a glass coffin at the Basilica of St. Joseph of Cupertino in Osimo, Italy. His feast day is September 18th.

Joseph is the patron saint of pilots, astronauts, paratroopers, air travelers, people with learning disabilities, students, and exam takers. There is a special Prayer and Novena to St. Joseph of Cupertino for Success in Exams, that can be prayed for one day or as a novena.