The Basilica of St. Mary Major, is one of the four papal major basilicas, and the largest, and perhaps oldest church dedicated to the Blessed Mother in the western world. It is also known as “Our Lady of the Snows” because as legend has it, the Blessed Mother herself, in a vision, appeared to a Roman couple in 352 AD and asked to have a church built in her honor on the Esquiline Hill, in Rome. To confirm this, the outline of the church appeared drawn in snow – in the middle of August!

While this legend can’t be confirmed, we know that the church was originally constructed by Pope Liberius and was called the Liberian Basilica. It has been rebuilt and expanded several times, especially after the Council of Ephesus in 431, when Mary was officially given the title “Mother of God.” 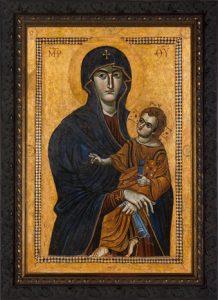 The Basilica is full of stunning historical, artistic, and architectural features, such as beautiful mosaics, the relics of St. Jerome and many popes, saints, and martyrs, a relic of the Holy Crib, the “Triumphal Arch,” and the most famous icon of the Blessed Mother known as the “Salus Populi Romani” (meaning the Health of the Roman People or Salvation of the Roman People. Located in the Borghese Chapel of the Basilica, the icon was reported to have helped save the Roman people from the plague. The very large icon, five feet high by three and a quarter feet wide (117 x 79 cm) is reported to have been painted by St. Luke the Evangelist on the top of a table constructed by Christ himself. It was restored by the Vatican Museums in 2018.

On August 5th, the Church celebrates the dedication of the Basilica. As part of the solemn celebration which recalls the Miracle of the Snows, a cascade of white rose petals is released from the beautiful coffered ceiling.