The poor hill town of San Giovanni Rotondo is located in the northern part of Italy’s heel or the Puglia (Apulia) region, and is made famous by the incredible life of one of Italy’s, and the world’s, most beloved modern-day saints: Padre Pio. Here thousands upon thousands of the faithful flock annually to the tomb of the humble Capuchin priest, located in the modern church which was built in 2004.

The entire area is dedicated to Padre Pio’s life work of serving the sick and the needy, evident in the hospital which opened in 1956, La Casa Sollievo della Sofferenza, (The Home for Relief of Suffering), which is considered to be one of the best medical facilities in all of Italy. The area is also popular with pilgrims thanks to the cave of St. Michael the Archangel, Monte Sant ‘Angelo, located less than an hour away from San Giovanni Rotondo, along the Gargano peninsula. The apparitions, which occurred in the late 5th century to the local bishop are approved by the Catholic Church. 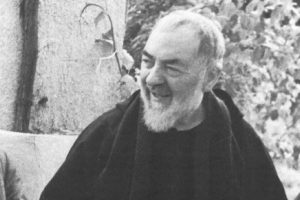 Padre Pio, now known as St. Pio of Pietrelcina, is most famous for his healings, bilocations, and many miracles that made his monastery extremely popular for people searching for spiritual and physical health. He was the first priest to receive the stigmata, the wounds of Christ in his hands and feet. Padre Pio died in 1968, aged 81 and was canonized by Pope John Paul II in 2002. His remains reside in a crypt at the Church of Santa Maria delle Grazie, next door to the Monastery. His feast day is September 23rd. He is the patron saint of Italy, Civil Defense workers, and adolescents.

While visiting the tomb of Padre Pio, as well as the town in northern Puglia dedicated to this beloved saint’s incredible ministry to the poor, which is a must see for faithful Catholics, so many forget about what is also available to them south of Padre Pio’s area in the beautiful Puglia region.

Less than two hours south along the Adriatic is the coastal city of Bari, home to the cathedral and tomb of St. Nicholas. And less than an hour from Bari is the site of one of the oldest cities in the world, the ancient city of Matera. Matera has been the city of choice for many a Hollywood producer due to its unique setting. Mel Gibson’s famed,   The Passion of the Christ was shot here and there is even a Passion of the Christ tour offered for those interested in learning more concerning the life of those living in what’s known as the “sassi” or the rocks of the area.

Matera is technically in the region of Basilicata, but the sections south of San Giovanni Rotondo offer so many unique opportunities to discover the real Italy. In addition to the cities mentioned, one can also spend endless days along the Adriatic coast strolling through the many waterfront towns not to mention the experiences offered in the nearby farm regions known as the maserie; farming communities of Puglia.