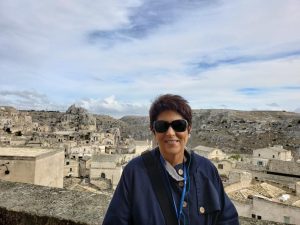 I absolutely love Matera, as it is one of my favorite places in Italy and covers one third of my Italian heritage. Matera is in the Basilicata region in southern Italy, and is one of the oldest continually inhabited settlements in the world — possibly 9,000 years! It is famous for its Paleolithic caves, monasteries, and stunning churches such as the Chiesa di Madonna delle Virtù, which was said to be built in the 10th or 11th century and restored during the 17th century. The church is known for its “negative architecture” which is carved out of limestone. Matera is filled with unique caves, and most of its buildings and houses climb up and down the hillside and look like they are piled on top of each other.

Beyond its rich and historic architectural features, Matera is famous for its yearly festival, “Festa di Maria Santissima della Bruna.” This week-long July festival, held since 1389, celebrates the city’s patron Madonna Della Bruna. Filled with families, fireworks, food, local bands, concerts, and large processions, especially on the special day of July 2nd, a statue of the Virgin makes its way through the streets on a large papier-mâché float of a chariot. At the end of the procession, the Virgin safely ensconced in her church, the crowd famously destroys the chariot and takes pieces home for good luck.

This area, one of the locations of Mel Gibson’s famous 2004 movie The Passion of the Christ, is a survivor of millennia of history including wars, plagues, poverty, earthquakes, and occupations and has come through still standing, and with a joy for life. Even if you can’t attend the festival, be sure to visit this unforgettable UNESCO World Heritage Site when you visit Italy.

Watch my video Mysterious and Magnificent Matera – One of Southern Italy’s Hidden Gems!